Located in Montreal, Canada, Metatron is a small, independent press that publishes contemporary literature and works by new and rising authors. Almost all of its authors are under thirty years old, and their works reflect concerns such as love and relationships in the age of social media, existential angst, reconciling the spiritual with the digital and MySpace-era nostalgia, among others. Along with Ashley Opheim, who founded the press, I currently serve as co-editor of Metatron. We’re both writers with good intentions but limited time, and we have no concrete experience running a business. Metatron Press started with no safety net, investors or carefully thought-out business plan. Yet so far, everything is going great. When I joined Metatron in 2014, the press had already published six titles and received positive media coverage.

I met Ashley in 2011, through Concordia University’s Creative Writing program. Our literary tastes overlapped, so we became friends and began working together on countless projects. We organized several well-attended readings in Montreal, a little miracle as we had virtually no budget. Later, in the fall of 2013, Ashley applied for a small grant from Emploi Québec’s Jeunes Volontaires program. At the time, I was living in Toronto, so I could only follow her progress through the grant application system from a distance. Though I knew she might receive money in the end, it didn’t feel like a game show, where you spin a wheel and win thousands of dollars and maybe a cruise, but more like something procedural and mysterious, as if she was defending herself in a court of law, trying to argue that she deserved retribution.

The grant wasn’t an overwhelming amount of money, but it was enough for Ashley to start experimenting with different ideas. She made good use of this initial flexibility. It helped Metatron exit the grant stage and become a self-funded, independent entity. When I moved back to Montreal in 2014, it seemed perfectly natural for me to start helping Ashley with Metatron

A few lessons from Metatron’s journey so far:

1) Leverage pre-existing chemistry. My friendship with Ashley (pictured below) is a huge asset for Metatron, I feel, as we can pitch ideas to each other quickly, delegate tasks knowing the other will get things done and generally feel good when working together on projects. The sub-text of mutual respect and trust in our communications can only be earned through years of working together, and sometimes failing together. And countless other friends (and friends of friends) have helped Metatron. Ridiculously talented (and busy) local graphic designers Freyja & Zamudio, for example, took the time to create two high-quality book covers for the press. Metatron has also received a lot of support from Montreal artists like Claire Milbrath, Rachel Shaw and Rebecca Storm, and bookstores like Drawn & Quarterly. These contributions, big or small, are all invaluable. I am often surprised by how eager our friends are to pitch in. 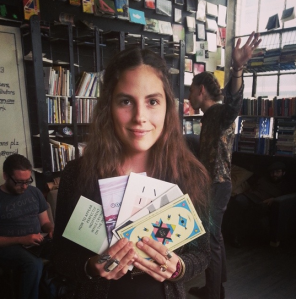 2) Work fast. One advantage of running a small indie press is that we’re usually able to fast-track the typical production cycle of a book. Instead of a book coming out a year or more after the initial publishing agreement is signed, it can come out a few months after work begins. This can give the final product an increased sense of urgency, though it also means there will be less time to let the work “rest” and to return to it later with fresh eyes.

3) Build your community. Metatron doesn’t present itself as a literary press that takes itself very seriously, but rather as something artistic powered by positive energy and good intentions. It doesn’t only publish books and booklets – it also promotes the work of local writers, artists and musicians on its blog, fostering good vibes and a sense of community. This, I feel, gives the press a distinct flavour. In addition to being thought-provoking, literature can be entertaining, welcoming and serve as the basis for a strong community. 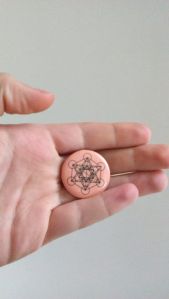 4) Keep things small. Metatron’s finances often feel like an aquarium to me, like a delicate ecosystem. All profits made by the press are pumped right back into reprinting current titles or publishing future ones. To keep costs down, it’s been helpful to focus on smaller print runs, and to keep distribution entirely in-house. Moreover, some of Metatron’s titles are booklets rather than books. The booklets are a little bigger than your average chapbook, but more compact than a full-length, perfect-bound book. I really like this format, as it allows us to work with a lot of new and rising authors who haven’t been published in print before. Since booklets are also cheaper to produce and ship, they can also be sold for less.

5) Have no idea what you’re doing. And finally: it’s okay to try new things, or figure them out as you go. In Spring 2015, Metatron will publish the full-length, perfect-bound debut of Toronto-based writer Sophia Katz, a big release for us. If we have to change our methods to produce and ship more copies, we’re confident that we’ll be able to figure out a way to adapt. Metatron has also announced the inaugural 2015 Metatron Prize for contemporary writers. The winner will receive $150, a publication deal with Metatron and a selection of past Metatron titles. Before announcing the contest, it seemed impossible for us to estimate how many submissions we would be receiving for something like this, so we simply decided to go for it and see what happened. In the end, we were blown away by the quality, quantity and diversity of manuscripts that we received, and we are now hoping to do the prize on a yearly basis.

Though not all of Metatron’s experiments will pay off, they should all prove valuable in some way, and it seems likely that this willingness to be playful and try out new ideas will remain an important part of the press’s identity. 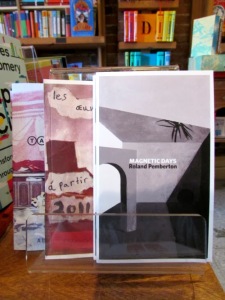 Guillaume Morissette is the author of New Tab (Vehicule Press, 2014), which was shortlisted for the Paragraphe Hugh MacLennan Prize for Fiction. You can find him on Twitter at @anxietyissue