A year ago, I’d have never believed I would be asked to advocate Indigenous literatures on CBC for Turtle Island Reads. Given that I was living in St. John’s, Newfoundland, teaching and studying in the English department at Memorial University (MUN), I had no clue I’d be islanded again, but this time in Montreal. Let alone be invited to speak about Indigenous literature on national radio.

Just over thirteen moon cycles later, after taking the first (and only) “Aboriginal Myth, Medicine, and Magic” course offered at the graduate level at MUN by Dr. Valerie Legge and co-instructor Amelia Reimer, I shared a knowing wink with Creator while sitting on the stage with my fellow Indigenous advocates. As a student of literature, I came out of the academy and into the public with Métis poet and musician Moe Clark, who advocated for Leanne Betasamosake Simpson’s This Accident of Being Lost; and Anishinaabe comedian and writer Ryan McMahon, who heralded Eden Robinson’s Son of a Trickster. I trumpeted Carol Daniels’ novel, Bearskin Diary.

“I shared a knowing wink with Creator while sitting on the stage with my fellow Indigenous advocates.”

We gathered at Tanna Schulich Hall at McGill University on September 20, days before the fall equinox. Our host and moderator, CBC’s Waubgeshig Rice and Nantali Indongo, facilitated a vital conversation spanning issues of storytelling, trauma, healing, and the need for Indigenous literatures. Truthfully, all three of us advocates could have sung praises for one another’s texts, as each book is made of powerful medicines and provocative storytelling, and each one embodies Indigenous knowledge systems.

Part of the role of advocates is to select a book, and each of us picked texts that spoke to our own craft and the relationship to our own Indigenous being. Clark was drawn to Simpson’s This Accident of Being Lost because of its poetic and sonic qualities. Much like Simpson’s work, Clark’s music breaks and beckons to tradition. Simpson doesn’t adhere to the infrastructure of the colonial English language. She avoids capitalization. Sometimes she writes in Anishinaabe, and doesn’t feel it necessary to translate. Clark approached her pitch in a similar fashion.

McMahon highlighted the fact that each of the authors were First Nations women: “We’re in a moment now for Indigenous women artists. We need to not forget that.” He pitched Robinson’s Son of a Trickster with his trademark humour and intelligence.

As I first encountered Daniel’s Bearskin Diary when reviewing it for The Malahat Review last year, I recognized how much the novel has shaped my own work. Not only did I feel a strong kinship with the novel’s protagonist, Sandy, a Cree journalist and TV reporter for CBC who comes into her Indigenous culture through telling other people’s stories, but also with the book’s relationship to the ongoing genocide of Canada’s Missing and Murdered Indigenous Women, Girls, and Two-Spirits.

“I feel a strong kinship with … the book’s relationship to the ongoing genocide of Canada’s Missing and Murdered Indigenous Women, Girls, and Two-Spirits.”

My own work spans genre, as I began my writing career as a journalist. Much like Sandy, I became comfortable asking questions and conveying the narratives of other people’s lives. Criticism has always been equal parts discovery and intellectual engagement. It’s a place to find and be found. From there, I became a poet (Daniels writes poetry, too). My forthcoming book, Who Took My Sister? (BookThug 2018), is a collection of poems and texts that hold and carry trauma. These poems are contemporary poetic strategies, both haunting testaments and a mix of Indigenous medicines. Who Took My Sister? is a rally cry, a space for raising awareness and cutting truths. It bears witness to the national genocide of Indigenous Women, Girls, and Two Spirits, whose lives are cut short due to the colonial agenda.

“Criticism has always been equal parts discovery and intellectual engagement. It’s a place to find and be found.”

Who Took My Sister? is also being transformed into a touring classical music piece for violin and piano composed by Melissa Hui, and will be performed by Indigenous Inuk artist Laakkuluk Williamson Bathory in spring 2019.

Poetry has been an ongoing journey with many twists and turns. Recently, it’s led me to writing plays. I’ve been working on The Landless Band, a theatre show about a character who grows up in the suburbs, then learns she’s Indigenous. Tying back to Daniel’s work, while her protagonist Sandy was visibly Indigenous with darker skin, her storytelling techniques overlap with mine: we both draw from a personal narrative and explore it through characterization. The Landless Band is being presented in a workshop form at LSPU Hall in St. John’s, Newfoundland in spring 2018 by Eastern Edge Gallery.

“The most exciting writing in this country is rooted in Indigenous writers, playwrights, and poets.”

While Turtle Island Reads promotes Indigenous literatures, it also honours the advocates and their practice. Having only recently arrived in Montreal, to find myself in a room full of avid readers who are excited about Indigenous writing was an honour. It’s a testament that we’re ready to step beyond the canon, and unpack Canadian literature. We’re making room for new voices. Perhaps I’m biased, but the most exciting writing in this country is rooted in Indigenous writers, playwrights, and poets. 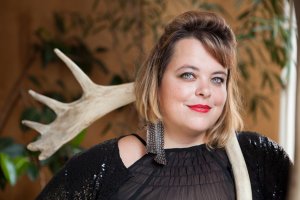 Shannon Webb-Campbell is a mixed Indigenous (Mi’kmaq) and settler poet, writer, and critic currently based in Montreal. Her first book, Still No Word (2015), was the inaugural recipient of Egale Canada’s Out in Print Award. She was the Canadian Women in the Literary Arts (CWILA) critic-in-residence in 2014, and sits on CWILA’s board of directors. Her work has appeared in many anthologies, journals, and publications across Canada, including the Globe and Mail, Geist magazine, The Malahat Review, Canadian Literature, Room, and Quill and Quire. In 2017 she facilitated a book club-style reading of The Final Report of the Truth and Reconciliation Commission of Canada at Atwater Library. Who Took My Sister? is her second book.