Alice Zorn’s new novel, Five Roses, is named after the FARINE FIVE ROSES sign that marks the southwest horizon of Montreal and Pointe St-Charles, where the novel is set. Photo: Alice Zorn

You’ve finished your novel manuscript and you even – finally! – get a publisher. It took ten years. You have Neanderthal muscles across your brow from frowning at the computer screen. But now you’re home-free. Bingo!

Then you get the first slew of comments from your editor. She’s the objective eye who sees what the book can be, but isn’t yet. Does it begin in the best possible place? Is there too much exposition? Does it have structural integrity? What about the ending? She tells you all the darlings you cherished while you were writing don’t belong unless they serve the book. The clever turns of phrase, the crisp dialogue, the research that shows off your erudition, the quirky events that really happened. Your clean manuscript pages are tattooed with strokes and question marks. Some editors slash with red pen. I’m so glad mine used pencil.

With my first novel, Arrhythmia, I was advised to lop two main characters, cut ninety pages and replace them with new writing. I couldn’t believe it. Hadn’t the publisher already accepted the book? My editor was firm. I had to learn how to rethink developments in the novel as narrative choices. I reminded myself that my editor, like me, only wanted what was best for the book. After all, she brought the manuscript to the acquisitions table, arguing that – out of all the other manuscripts being vetted – mine should be published.

I rewrote those ninety pages because I realized the change was structurally necessary to the novel. And I rewrote them, yes. My editor didn’t tell me what to write, only that the direction I’d originally taken wasn’t the best option. However, I did not lop those two characters. I made them stronger and more integral to the novel. Writing the novel was hard, but editing it might well have been the more profound learning-about-writing experience.

“Writing the novel was hard, but editing it might well have been the more profound learning-about-writing experience.”

My second novel, Five Roses, will be published by Dundurn Press in 2016. I’m at the copy editing stage now. This is the finicky time when syntax, word choice and punctuation come into question. I open the document and scroll through 320 pages with red commas added, words underlined and lassoed to dialogue bubbles. Individual words are highlighted in yellow. A character is cycling along a city street, alert to the nervous rush hour traffic, as she thinks about the police sending out an alert to catch a criminal. I swear at myself for not having noticed. I must have read this page twenty times already! But my brain was in a groove. And as I’ve repeatedly witnessed, my brain is willful in its fondness for repetitions, internal rhymes and alliteration.Now, too, is when I discover that grammatical niceties aren’t as ingrained as I assumed they should be after five decades as a voracious reader. Shouldn’t I simply know all these distinctions by now? Seems not.

And so I learn that there’s a difference between hanged and hung when it refers to a human body that is being put to death. I hung a picture on the wall. The executioner hanged a man. However, a human body that was already dead hung from a hook. I need to know that for this novel, since a character was hanged. 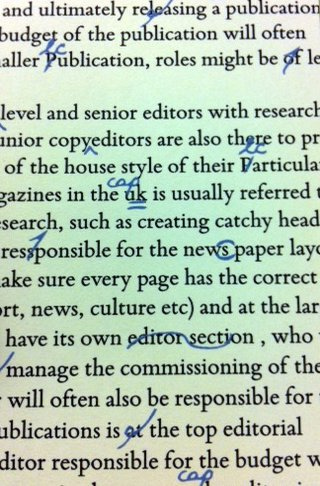 I had to teach myself the farther/further dance after having worked with a copy editor who changed all my farthers to furthers. He thought further sounded more posh. Fine, I thought. He’s the copy editor. Maybe it’s one of those UK vs US things. For a couple of years I banned all farthers from my writing. Then I had a story returned from a copy editor who had changed some of my furthers to farthers. That was more curious. I finally pulled a tome of grammar off the shelf and discovered there’s a rule. Farther is for physical distance. Further is the abstract concept. You might think that I would already have known this, but I didn’t. And I’m not the only one. I continue to see farther and further misused in books published by reputable houses. (If you want a trick to remember which to use when, think far > farther. Thank you to Carol Weber for this tip.)

You aren’t the best judge of your work, because you’re too close to the writing.You need an editor. Not your partner nor your best friend, who won’t want to hurt your feelings, but an experienced and discerning professional who will help you realize the full potential of the book.

I’m now at the last read-through before Five Roses goes to the design people. I’ve rewritten the manuscript three times since I thought it was finished in 2013. Cutting, puzzling, moving pages around. Lots of darlings sent marching to the recycling bin. At each stage of editing, the book becomes more of an entity that lives separate from me. Which is what it will have to be when it’s sent off into the world.

Alice Zorn’s book of short fiction, Ruins & Relics, was a finalist for the 2009 Quebec Writers’ Federation McAuslan First Book Prize. In 2011 she published a novel, Arrhythmia, with NeWest Press. She has twice placed first in Prairie Fire’s Fiction Contest. Her second novel, Five Roses, will be published with Dundurn Press in July, 2016. She lives in Montreal and can be found at http://alicezorn.blogspot.ca